Imagine if George A. Romero had written Dawn of the Dead as a series of delightfully witty, irreverent and gruesome poems, or if Capcom had made Resident Evil with an even more lyrical sensibility. Imagine if Sam Raimi had told the story of Evil Dead as a surreal public service announcement, and Ash spent the entire film kicking butt and talking in haiku. If that all sounds like good fun to you, then you will absolutely love this new poetry collection by Nottingham-based author and DIY Poet Alistair Lane. 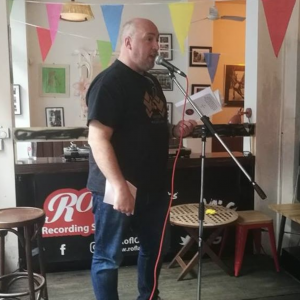 ‘Haiku of the Dead’ is a tongue-in-cheek A to Z survival guide for the impending zombie apocalypse. It’s a fast-paced, funny book that shows readers what to do should they find themselves trapped in a town filled to the brim with the reanimated corpses of the undead.

Part self-help guide, part dystopian hell-scape, ‘Haiku of the Dead’ pokes fun at the stereotypes surrounding everyone’s favourite brain-eating monsters, and explores what it takes to survive in a hostile, unforgiving environment where everyone wants to eat you!

As you can probably guess, this is something of a comic parody of the zombie genre and while there are jokes aplenty, Alistair also manages to slip in some really interesting commentary about the nature of modern society. When the zombie apocalypse hits, problems like traffic jams, tax returns, bad dates and reality TV will no longer exist – so, it seems there’s always a bright side to the end of the world!

In fact, for a book about an Armageddon, ‘Haiku of the Dead’ is actually strangely uplifting, and Alistair is keen to emphasise that team-work, ingenuity and a little bit of cheeky love-making are all that we need to keep the zombies from the door.

It’s a great metaphor for life and, at its heart, ‘Haiku of the Dead’ is a book about our shared humanity. It’s a thoroughly good read too.

You can pick up your copy of ‘Haiku of the Dead: An A to Z of Survival’ by Alistair Lane, in for kindle or in paperback, from Amazon here: https://www.amazon.co.uk/dp/B07K1Q8MKY