Full of the excitement of the successful launch of Every Last Biscuit, I decided that it was the time to branch out and take myself, and my pamphlet on tour. Abroad. 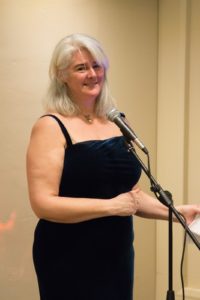 So, just before Christmas I hopped on a train over to Brussels and secured myself a slot at Speakeasy, the monthly spoken word event.
I happened on the Christmas Special so the event was somewhat larger than normal and there were about 150 people packed into the basement of the Piano Factory, now a collection of artistic spaces.
I was greeted on arrival by the irrepressible Mixy who was one of the compares for the evening, and Helene from the group Mididelapoesie, who interpret poems though films. We had a good chat and discussed diy poets and I invited them to get in touch with the group should any be over this way.
There was a vibrant mix of people of all ages and backgrounds performing in different styles. It was a game of three halves with a musical act to conclude. Sound a familiar format?
This being Brussels, it was a tri-lingual event. Having used all my French introducing myself, then concluding by thanking them for having me in Spanish (Not one of the 3 tri-lingual languages, but daftly my default ‘foreign’ language when under pressure). I read in English. Other performances were in a mixture of Dutch, French and English. There was a very positive audience and acts varied from classic poetry, through raps to duologues and dance. A very lively evening.
I would highly recommend Speakeasy to any poets heading out to Brussels (While we still can). You can get in touch with them on facebook.
If you’d like a copy of Every Last Biscuit, you don’t need to go to Brussels, you can either get it at Five Leaves Bookshop, or stop me for one when you see me.
Lytisha