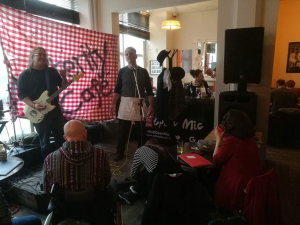 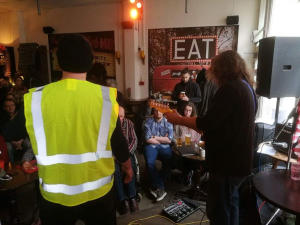 The penultimate evening of Nottingham Poetry Festival saw Jam Cafe become Austerity Cafe, a place where the rich, poor, left and right are all provided food for thought by Yannis, the cafe owner.

A politically poetic musical that would fit perfectly into the Edinburgh Fringe, Austerity Cafe is the brainchild of Andy Szpuk and Paul Quadros. Paul provides a powerful electric guitar soundtrack for Andy, as he flicks back and forth between the words of Yannis and three of his main customers, Phil, George and Karl.

Yannis is the perfect host, his tatty red and white sign inviting the full house into a day at his cafe, infusing you with his “nuggets of wisdom” as the customers arrive and leave throughout the day. In his white apron and yellow-green chef hat he tells us that he serves an austerity menu, where 20% of the food is taken away shortly after it’s served and the low gloom disguises its quality.

The first regular he serves is Phil, a dispirited lorry driver in a high-vis jacket. His lorry has shredded tires and is generally badly maintained, leaving it liable to cause a crash at any moment. He sees the ruling classes as misery inflictors and the rest of us as asylum seekers, jumping on the fumes to flee from all the cuts. 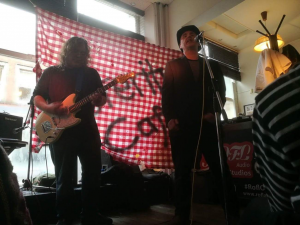 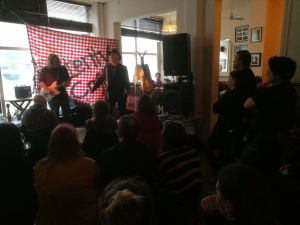 Several Porsches are parked near his lorry. One of them belongs to George, a banker dressed in a suit and bowler hat. George tells us in “A Thousand Quid Concealed in a Concrete Mattress” that all the homeless are affecting income generation, that they’re making money tax free and that you can’t even buy a cappuccino without tripping over a wino these days. He celebrates the cutting of the welfare state, believing it to be the only way to get the economy back on track.

The final customer we meet is Karl, a protestor who bluntly rails against the status quo in his camo jacket and beret, as he flicks through the tabloids provided by Yannis. Karl is full of their misinformation, his certainty trampling over their facts. “Accusations fly through mud, no sign of any truth” as he puts it, his only sarcastic crumb of economic comfort coming in “We’re Still Good at Making Guns”.

The whole musical is loaded with political and food based metaphor, while each character represents a different section of modern society. Paul’s guitar playing is always inventive and hypnotic, often at odds with the character it represents, George’s riffs reminiscent of early Clash, a capitalist with a punk melody, with Karl’s often intricate and complex, belying his straight talking nature. Paul even plays one song with a wooden spoon. Andy really owns the stage, his characters delivering a weight of words that really make you think, while always leaving you in doubt as to where it’s going next. 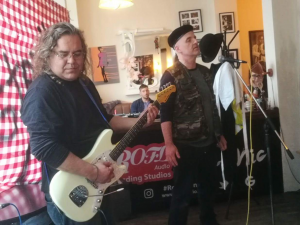 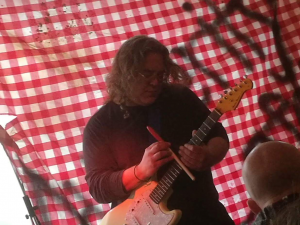 As Yannis closed up for another day, I was left in no doubt that Austerity Cafe is a fascinating and entertaining place. Remember to stop by if you’re in the neighbourhood.