DIY Poets have become a bit of a fixture at the Gate to Southwell Festival these days, so it was a pleasure to head back there for a Saturday showcase and a Sunday slam, where the winner would be crowned 2018 Bard of Southwell.

Under the red and white stripes of the Steeples Tent, with the stage being the grass in front of the ebbing and flowing crowd, our Andy Szpuk introduced six DIY Poets and three guests for long and diverse sets. 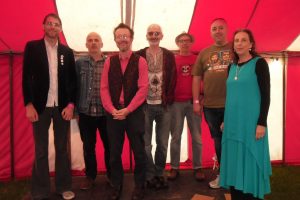 Clare Stewart told some beautiful poems about family and caring for others, while Al Lane, who didn’t bring his mankini, sensitively told us about his relationship with his Grandad and hilariously told us how to survive bring a modern Dad. Kevin Jackson unashamedly filled the tent with so much soul and texture that it nearly burst, while Martin Dean’s vivid images of a Russian classical music concert in Palmyra, Andy Szpuk’s tales of a Ukrainian Spiderman and Trevor Wright’s ride from the old Raleigh bike factory to Donald Trump’s prayer breakfast made it a very entertaining afternoon. I also performed, but it’s a bit weird to review yourself, so let’s move on.

Our three guests were in fine form too. Rob Dunford, a true salt of the earth Salford voice, gave us a great take down of Laura Kuenssberg and the southern domination of the Northern Powerhouse. Kezzabelle Ambler then inspired us with a rallying cry for diversity for National Hate Crime Week and how we can never be buried if we’re a seed. Finally, a last minute request saw a debut performance from Rachel Kenny, who read a 50 word story about revolution that was 51 words long. Wonderful stuff.

Afterwards, one of the audience told us that they weren’t expecting much but really enjoyed it, which was nice. 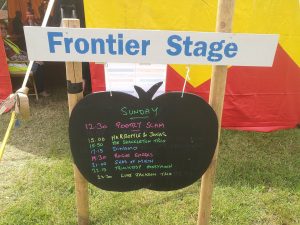 We moved to the Frontier Tent for the Sunday Slam, which was a bit like the Steeples Tent, except it was orange and red and had a full stage. Fourteen poets took to the mic for their three minute set, with each poet scored between 1 and 10 by three random audience members. The standard was very high and the poems came thick and fast, covering everything from weapon sales to solidarity with the Chechen LGBT community, via the politics of gender identity and a poem that name-dropped rivers from all over the UK.

Featuring first timers to old hands, DIY Poets to locals and an audience demand that Al Lane do his mankini poem as an encore, it was a fun afternoon. Hazel Warren and Sean Moore, the outgoing Bards of Southwell, weren’t there to defend their crown, with the new Bard of Southwell being me, actually. I was very surprised and happy that people liked my poem about grandparents and fish and chips as much as they did!

We all had a fabulous time at the Gate to Southwell festival and are already looking forward to next year. Hope to see you there!